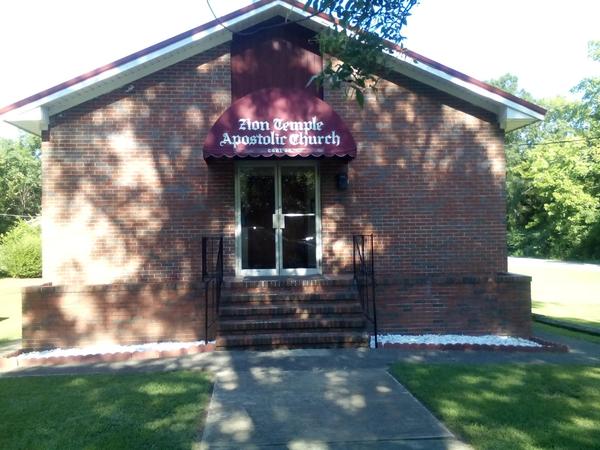 These two women faithfully met at this home for a while. A missionary from New York, Sister Clark, came down saying the Lord had sent her to Birmingham to help them. Sister Clark began to tell them about the Holy Ghost and being baptized in Jesus’ name. Through her teachings, four more souls were added to the church: Sister Annie Adams, Sister Lucille Johnson, Sister Prentice, and Sister Eliza Hunter. This brought the church roster to six. Bishop Lawson named them the “Six Sisters”.

The church was without a name. Although several names were submitted, the saints settled on the name “Little Zion” which was submitted by Mother Miller. Since the church was growing, they moved to a storefront off Carolina Avenue in Pratt City under the guidance of Bishop Perry and Mother Rosetta Thomas.

In 1963, the Lord blessed the saints to move into a new church located at 101 Cherry Avenue in Pratt City. It was the first all brick church in the diocese. The dedication services of Little Zion Church of Our Lord Jesus Christ were held on October 6-13, 1963. The theme was “Except the Lord Build the House, They Labour in Vain that Build It,” Psalm 127:1. Bishop William L. Bonner conducted the services.

Bishop Perry Thomas’ legacy was then passed on to Elder McWallace Williams, Sr. who served under the pastorate of Bishop Sherman Thomas at Overcoming of Ashville years earlier. Pastor Williams, Sr. faithfully preached and taught the Word of God. He along with his wife, Mother Sarah D. Williams, continued to bless the parishioners of Little Zion and the body of Christ over the next eight years. Elder Williams, Sr. soon became District Elder Number One over the Alabama Diocese. He loved the people of God, and gave himself without hesitation. After serving the Lord and the church devotedly, he was called home to be with the Lord in July 1990.

The church was blessed to have another able minister, Minister McWallace Williams, Jr., who had been called into the ministry years earlier. He was the eldest son of District Elder McWallace Williams Sr. and Mother Sarah D. Williams. He was installed pastor soon after the passing of his father. State Bishop, Bishop Milton H. Hill, of the Alabama Diocese performed the installation ceremony. Minister Williams Jr. soon became an Elder and zealously preached the Word of God.  Elder Williams Jr. labored loyally at Little Zion. He too was an anointed man of God, and served not only Little Zion but the body of Christ. He loved to preach the Gospel of Jesus Christ, he loved the people of God, and he would give himself without hesitation just as his father had. Under the pastorate of Elder Williams Jr., Elder Clinton Carr, Jr., a humble servant of the Lord and current pastor, was called into the ministry of the Lord.

The Lord has promised to never leave us nor forsake us. He did not leave Zion Temple without a pastor. In August 2001, through the prayers of the saints of Zion Temple, our State Bishop Milton H. Hill, and the appointing of the Lord Jesus Christ, Zion Temple was blessed with another pastor. Elder Clinton Carr, Jr. was installed as pastor and watchman on the wall of Zion Temple COOLJC.